Letter published in the Times of Malta following our successful court appeal to keep Dwejra dark.

Below you may find my letter published in the Times of Malta of Friday, 6th December 2019 following the successful court appeal to keep Dwejra dark.

A lesson for the future

Dwejra is a portal to the heart of our home in the cosmos – the Milky Way. This way of perceiving the site became firmly entrenched in my mind during my childhood, when I would excitedly head off to this darkest of sites – small telescope in hand – to gaze at a star-peppered sky, catching a glimpse of objects so distant that their light began their journey when Dwejra’s majestic sinkholes, such as the Inland Sea, had yet to form.

When I grew older, I encouraged friends to join me in experiencing this resplendent beauty, and such gatherings soon became fully-fledged astronomy nights for the general public, with the help of fellow members of the Astronomical Society of Malta and colleagues from the University’s Institute of Space Sciences and Astronomy (ISSA).

And yet, at a time when this site’s nighttime allure was still undiscovered by most, I feared that such views were already under threat, not just from encroaching light pollution from the rest of the Islands but, worryingly, from within the site itself. These splendid sights could end up erased before many even had the chance to witness them.  The overwhelming response to every photograph of Dwejra’s night sky that I started to publish convinced me that the public did care.

Realising that the problem had to be quantified, we embarked on a longterm project to undertake measurements of the night sky brightness all over the Maltese archipelago. Dwejra was – and still is – one of the sites under intense study. For months, joined by Birdlife, we attended hearings of the Environment Planning and Review Tribunal (EPRT), as it deliberated on yet another extension to an existing building at Dwejra. We presented our measurements, arguing for proper attention to the sensitivity of this site. In our mind, this was a no-brainer: there simply could not be any such development, given both the existing policies and what the data were clearly showing. So you may imagine the dismay and disbelief when, at the final sitting, I collected the decision document and read the verdict that overturned the Planning Authority’s prior refusal of a permit.

The call for support to NGOs was swiftly answered, accompanied by a resounding public outcry.  Following many more days of work, a court appeal was submitted, fronted by fellow objectors Birdlife on behalf of all 15 organisations. A separate appeal was filed by the Environment and Resources Authority (ERA).  The court of appeal revoked the EPRT’s decision. Dwejra was saved from what would have been a precedent-setting development – one that could easily have paved the way for sanctioned eradication of the night sky from one of the best sites left on the Islands.

Amongst other issues, the court noted that the Tribunal’s decision went against the clear pronouncements of the Gozo and Comino Local Plan, specifically the designation of this site as a Dark Sky Heritage Area under Policy GZ-DARK-1 – a point we had repeatedly stressed. It also remarked about how it had ignored the Strategic Plan for the Environment and Development (SPED).    And the court did not mince its words.  Perhaps the most pertinent message (translated from Maltese) is found in its confession to being “perplexed when sensitive sites are not considered with caution and serious reflection about how proposed development can impact a zone, taking into account the relevant plans and policies, and also considering the established facts that can help the Tribunal in its decisions.”

There is a lesson to be learnt here, and one hopes it will be remembered in the future.

Dwejra is still bathed in starlight, and the shearwaters can still be heard singing their other-worldly song. For this, thanks are due to each and every citizen who did their part. 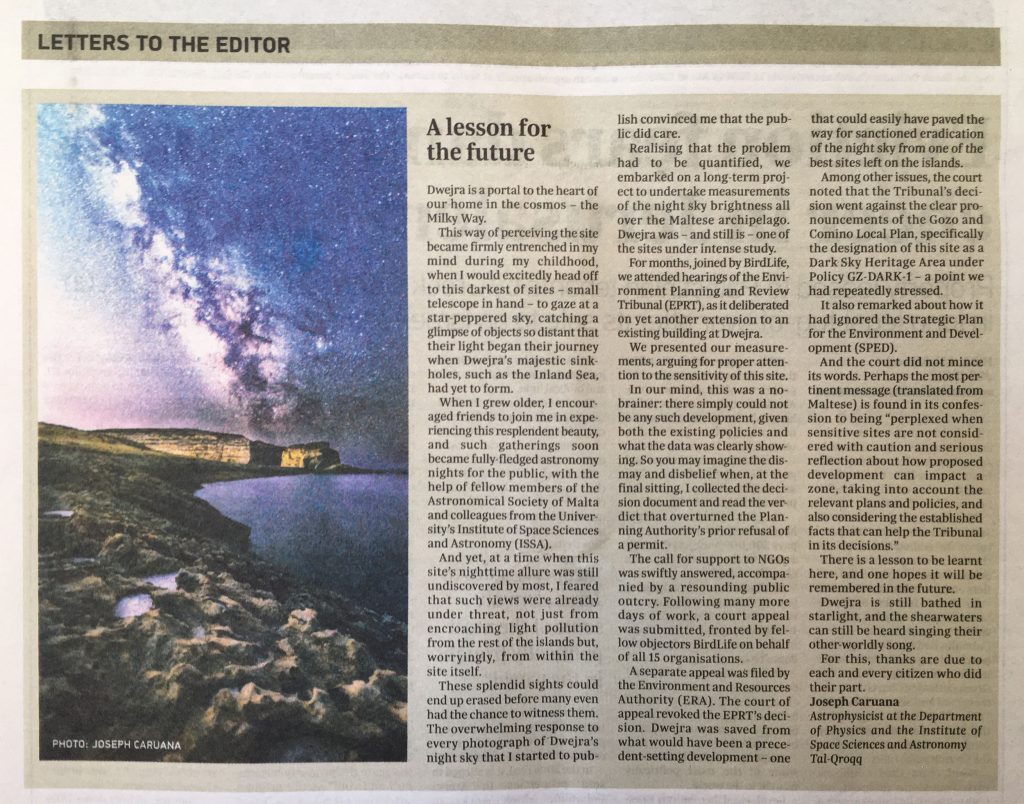