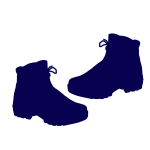 The West coast of Gozo has much to offer for both the avid and more relaxed hiker alike.  Pick your route, pack your lunch, set off with a friend and enjoy the splendour of high cliffs, the smell of sea spray, and beautiful countryside.

The area of Dwejra extends far beyond the region around the Inland Sea.  Wider Dwejra encompasses a large area in the West coast of Gozo, with a number of excellent routes for hikers to follow.  The one you choose depends on how long (and challenging) you want your hike to be.  In all instances, be sure to take heed of any signs you encounter along the way, including those signalling private property; please respect these at all times.

For those who are keen hikers, a nice trek has its starting point in the village of Kercem (refer to map below), passing by stretches of fields until arriving at Sarraflu, a pond in a site that is part of wider Dwejra.  From here you continue on to the Dwejra area.  While there you’ll want to check out all the various attractions (which you can read about in the other sections on this website).  When you’re ready to resume, head up to Fuq il-Qawra (i.e. the part above the Inland Sea) and continue on to the village of San Lawrenz.  Walk from here to the village of Santa Lucija, and back to your starting point.

A beautiful walk takes you South of Dwejra Bay along the cliffs (shaded in yellow in the map on the right), coming to such stunning spots as Ta’ Harrux, from where you can take in the entire Dwejra area in one gaze (see image below).  Continuing on, you will eventually arrive at Ras il-Wardija (Southernmost spot in the map to the right), where you will encounter a Punic temple dating from the third century B.C.  Settlements at this site probably existed as far back as 1500 B.C.

Heading off in the opposite direction to the route described in the previous section, you will first explore the area known as Ta’ Slima.  From here you will have fantastic views of majestic cliffs, with two caves visible, Ta’ Tejtuand L-Għar ta’ Mannara.  The first of these is actually an arch which is too narrow for a boat to pass through.  Before moving on, take a look again at the map to the right.  Do you notice how the cliffs seem to trace two successive curves?  These are the edges of two sinkholes, with the third lying just above the turn-over point known as Tal-Ħawt. From here you can walk on to Ta’ Ċamma, and if you wish proceed even further North.