While Dwejra is mostly known for its natural attractions, there are several historical points of interest which we shall briefly be looking at on this page.  Before we proceed in more detail, it is worth noting that when one considers the West of Gozo, it is quite readily apparent that except for Dwejra, there is no trouble-free access to land for the entire stretch between Wied il-Mielaħ (in the confines of Għarb) in the North and Xlendi in the South.  This area exhibits sheer cliff faces that are virtually unsurmountable.  Perhaps, it is then not too surprising that, as we shall see in the first section, the earliest human settlements were located around the area of Dwejra.

​We’ll have to go quite far back in time to start our excursion, as the earliest known settlements around Dwejra are from the Neolithic period, stretching back some 7000 years to what is known as the Għar Dalam phase.  These first dwellings are still visible to this day as caves atop the plateaued hill of Għajn Abdul​.

The caves at this plateau represent the first human settlement in Gozo.  It is a shame that some other caves in the vicinity were destroyed by quarrying activity.  It is also unfortunate that unauthorised excavations have taken place in the past, which had unearthed pottery sherds from the Għar Dalam phase.  Pottery from Għajn Abdul exhibited purer Stentinello attributes (Stentinello was a middle Neolithic Sicilian culture) than pottery found elsewhere on the Maltese islands, possibly indicating that Gozo was settled first. Two of the caves at Għajn Abdul also yielded pottery sherds from the subsequent Bronze age.  While not very well known or popular, these caves are a true national treasure.

The Punic Temple at il-Wardija

More well known are the punic remains at Ras il-Wardija, a protruding point in the South West of Gozo with stunning views of the surrounding cliffs.  This promontory, in fact, happens to be the highest unbroken vertical cliff-drop on the Maltese islands, and commands a breathtaking view of the Fungus Rock, Dwejra Bay and Qawra (see image on the right).

Wardija is thought to have been inhabited for the first time around 1500BC during the Bronze age.  In much later times, during the Punic period, a rectangular chamber was carved in the soft Globigerina limestone rock (Franka).  The interior walls of this chamber have a number of niches carved in them (see below picture).

This site was still used until around the 5th century AD.

The Tower of Dwejra

There are a number of watch towers around the Maltese islands whose purpose was to watch out for enemy approach, particularly by pirates. Known as Lascaris towers, they are so-called because they were built during the period when the Order of St John was headed by Grand Master Lascaris. In total, between 1637 and 1652 Lascaris commissioned seven towers which were designed and built by Vincenzo Maculani, the pope’s own military architect, with the towers of Xlendi and Dwejra being the last two to be built.  Following Lascaris, Grand Master de Redin built a further thirteen towers of similar design.

Dwejra Tower, or is it is also known It-Torri tal-Qawra (The Tower of Qawra),  was finished in 1652 and paid for by the Università of Gozo.  Later, it was used to act as a watch outpost to guard against unauthorised access to the Fungus rock (more about this later).  It was also manned during both the first and second world wars.

These days it falls under the auspices of the non-governmental organisation Din l-Art Ħelwa, and is open to the public free of charge.

The Fungus Rock has a most interesting history for being a “mere” rock!  Putting its geology aside (you can read more about that in the geology section), its claim to fame in history is mostly due to a number of mistaken facts about a plant that it hosts: the ‘Malta Fungus’ (Cynomorium coccineum), which gave the rock its name.

There are at least three counts of misunderstandings about this plant.  Firstly, whilst it was known as a fungus, it is actually a parasitic plant.  Secondly, it was thought to be endemic to this rock, but (while certainly rare) this plant is found in various other places, both in Malta (such as at Dingli) and elsewhere in the Mediterranean.  It can be found even as far as Afghanistan, Saudi Arabia, and Iran.  Thirdly, it was thought to have medicinal powers, scientific evidence for which is lacking.

Viewed with hindsight, the efforts to which this plant was guarded become laughable.  ​For make no mistake: this plant was truly treasured and protected, and apart from finding use by the Knights as a cure for various maladies (including dysentery and hypertension), it was presented as a gift to noblemen and visitors to the islands, earning it the local name Għerq is-Sinjur.  The knights guarded Fungus rock very closely, to the extent that during Grand Master Pinto’s reign, access to the rock was completely forbidden, with encroachers condemned to no less than three years of oarsmanship on the Knights’ galleys.  A cave was cut in the rock to host a guard, and later, Dwejra Tower would serve the purpose of guarding this prized islet in addition to serving as a watch tower against enemy approach.

As if these measures weren’t enough, the very walls of the Fungus Rock were artificially scarped under Pinto’s rule such that access was made even more difficult, and a funicular system was put in place to enable only authorised access to the islet.  Two holes on the mainland (at the site known as Ir-Ras) which secured the ropes of the funicular can be seen to this day (see images below), as are a series of rock-cut stairs leading to this site (image on the right). 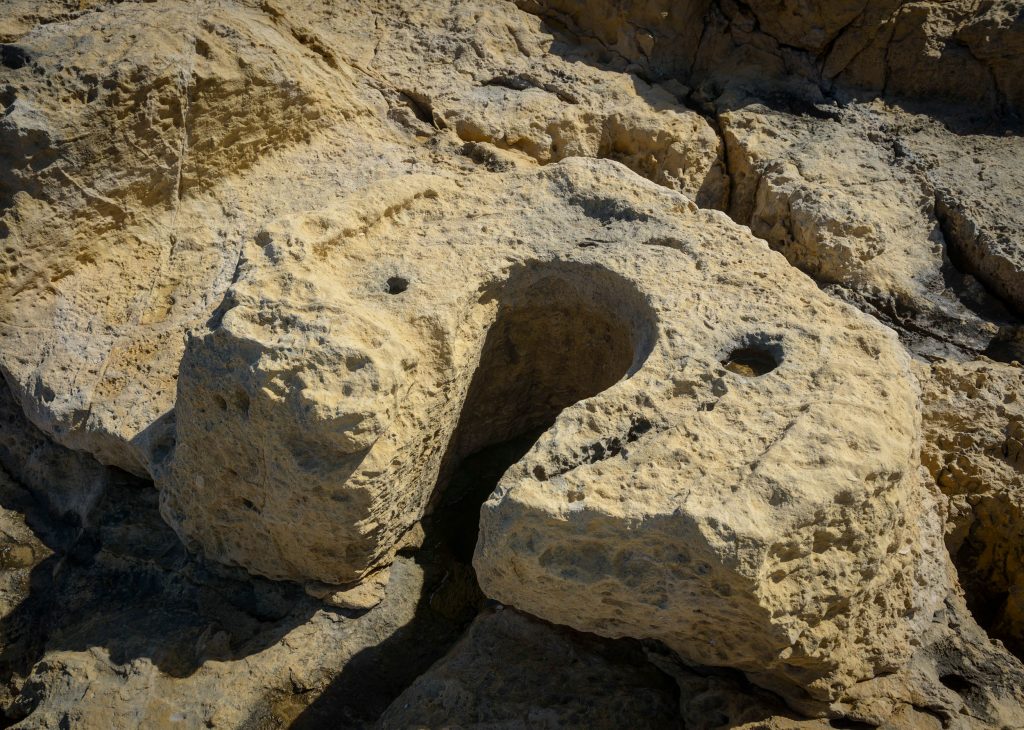 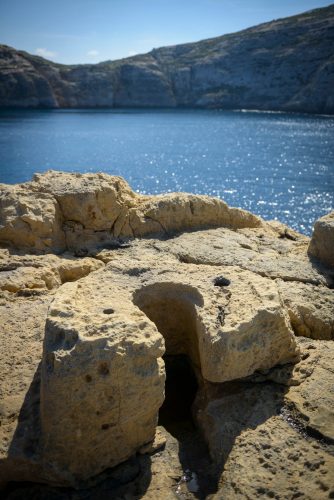 Dwejra also has a number of archeological remains that are as yet unexplained.  Foremost amongst these are a number of cart ruts, i.e. pairs of equidistant tracks/grooves carved in the ground.  Such cart ruts are found in several places on the Maltese islands, including Siġġiewi, Naxxar, Bidnija, and San Ġwann in Malta, and Ta’ Ċenċ in Gozo.  Usually surmised to have been used for transporting material from one location to another, the ones at Dwejra are somewhat difficult to explain away, given that there is no obvious location which can be identified as a potential destination for any such transport.  The cart ruts at Dwejra are also special in that they are found in Globigerina limestone.

Close to one of these pairs of cart ruts lies another mysterious artefact: the ruins of what seems to have been a circular construction.  A lot of this structure has clearly collapsed in the past, with only two layers of stones on its Northern side left standing, while the rest of it is in ruins.

Considerations of the method of its construction has led to the hypothesis that it could potentially be associated with the Bronze age (see An Illustrated Guide to Prehistoric Gozo by Anthony Bonanno in Gaulitana Series 3, 2002), but this remains very uncertain.  What is undoubtedly clear is the fact that the site commands an impressive view of the Inland Sea and surrounding area of Dwejra, which might have something to do with the choice of location for this structure.

Other archeological remains in Dwejra include rock-cut pans in the ground to the South of Wied il-Kbir (literal translation: ‘The Large Valley’).  Close-by, one may also observe a path of cobbled stone, a rare occurrence worthy of better efforts at conservation.  An interesting story which one may argue might hold a tenuous association to these pans, is that of three girls kidnapped by corsairs and imprisoned for some time in a well that is said to have been located at the location known as Tal-Bniet (‘Of the Girls’; see the site map on this page), which lies on the North side of Wied il-Kbir (see: Forty More Legends from Gozo: Stories of Bygone Times by Joe Bezzina in Gaulitana Series 9, 1997).

As you have seen, Dwejra is a site that holds immensely interesting records of past human history, stretching back at least 7000 years to the very first settlement in Gozo, and possibly even on the Maltese islands.  This is yet another facet of this place that, whilst perhaps not so well-known, makes the site truly special.