BLACKPOOL – we are playing Bootleg Social on Sunday 31st January with the mighty Cassels .

We are pleased to announce that Louder Than War Records will be releasing the our forthcoming EP “Everything Is Absolutely Fkkkkkkd”.

The limited edition 6-track EP will be releaased on the 22nd January 2021 pressed on 10″ yellow vinyl, housed in a stunning picture sleeve. 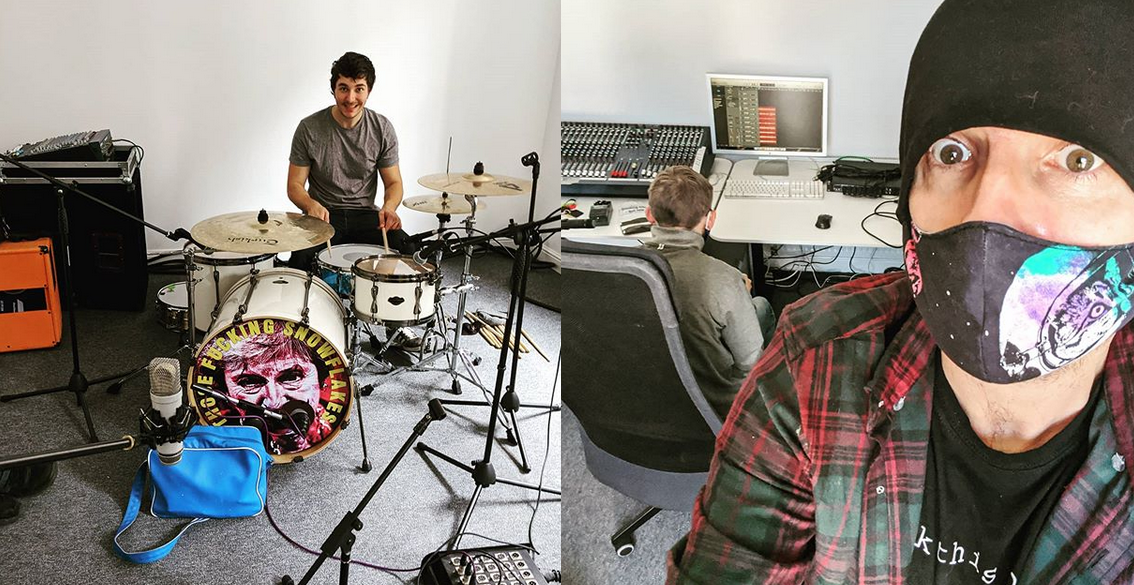 We are back in a room with microphones recording six songs for a new release due early next year on a fancy physical release.

Shaun at Rec Blackpool is once again handling the capturing duties, go show them some love on facebook using the link below
https://tinyurl.com/recblackpool 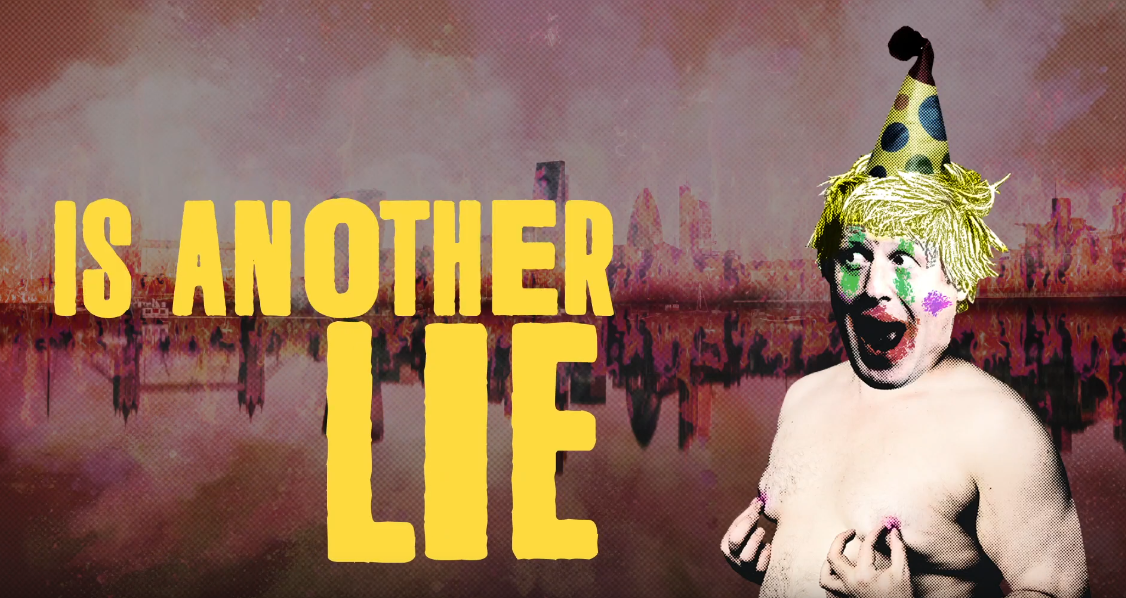 Watch the lyric video for our song ‘Boris Johnson and the Big Red Bus of Bullshit’ now.

Watch the video below
https://youtu.be/klw_zNdPzbc

In other news we head back to REC next week to record six songs for a new vinyl release next year, more details soon. 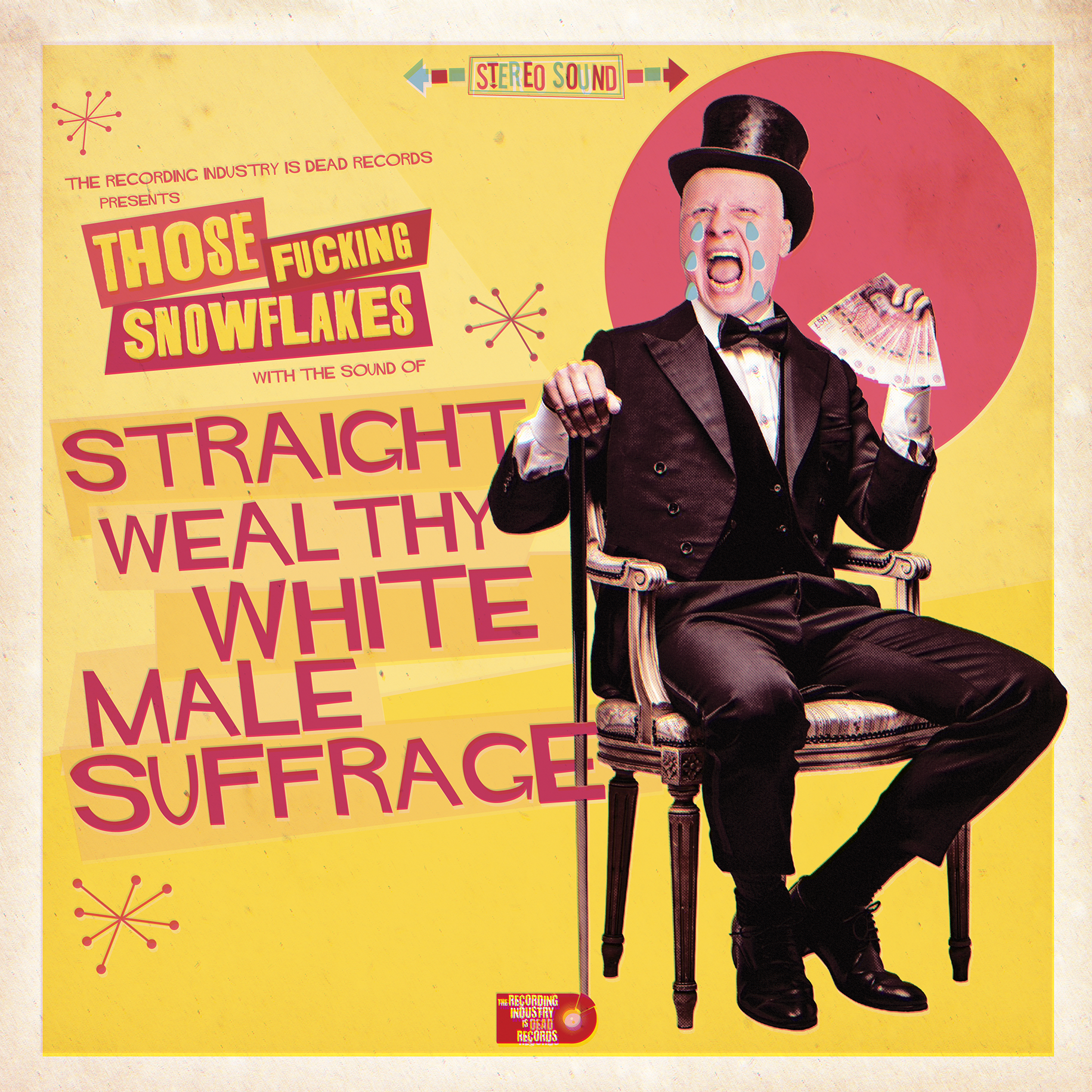 ‘Fun blast of lefty views, like a fuzzed up shouty Half Man Half Biscuit, touching on real matter with a tweak of comedy’
Wayne Carey – Louder Than War

‘The punk resurgence is bringing a lot of exciting music and this is no exception. It’s like riding a rollercoaster of left wing frustration with all the adrenaline to match. Sure, it’s rough and raw but that’s all part of its charm and it’s certainly going to be exciting to see where this EP takes the Blackpool based band.’
Lauren Wilson – RGM ‘Reyt Good Magazine’

‘These Fucking Snowflakes are out there deploying 1000 volts through the civility of discourse. The shortest route between two points is often through something and TFS are a roadblock busting sonic juggernaut. This isn’t just an EP of worthy polemic with catchy song titles it is made up of five cracking songs, a roiling sea of heavy, heavy chords, swirling riffs and screaming vocals’
Paul Cook – Joyzine

‘Packed with anger (and more than a little frustration) from the very first note, ‘Part post-punk but with added extra-chunky Reuben-esque riffs’
Ryan Barham – Spectral Nights

‘TFS like to brutally dismantle everything that’s wrong with society like a mix of Idles and the Manics but with wigs and northern accents. The sound of anger and hate aimed at a society that has got everything upside down right now.
Roland Monger – Listen With Monger 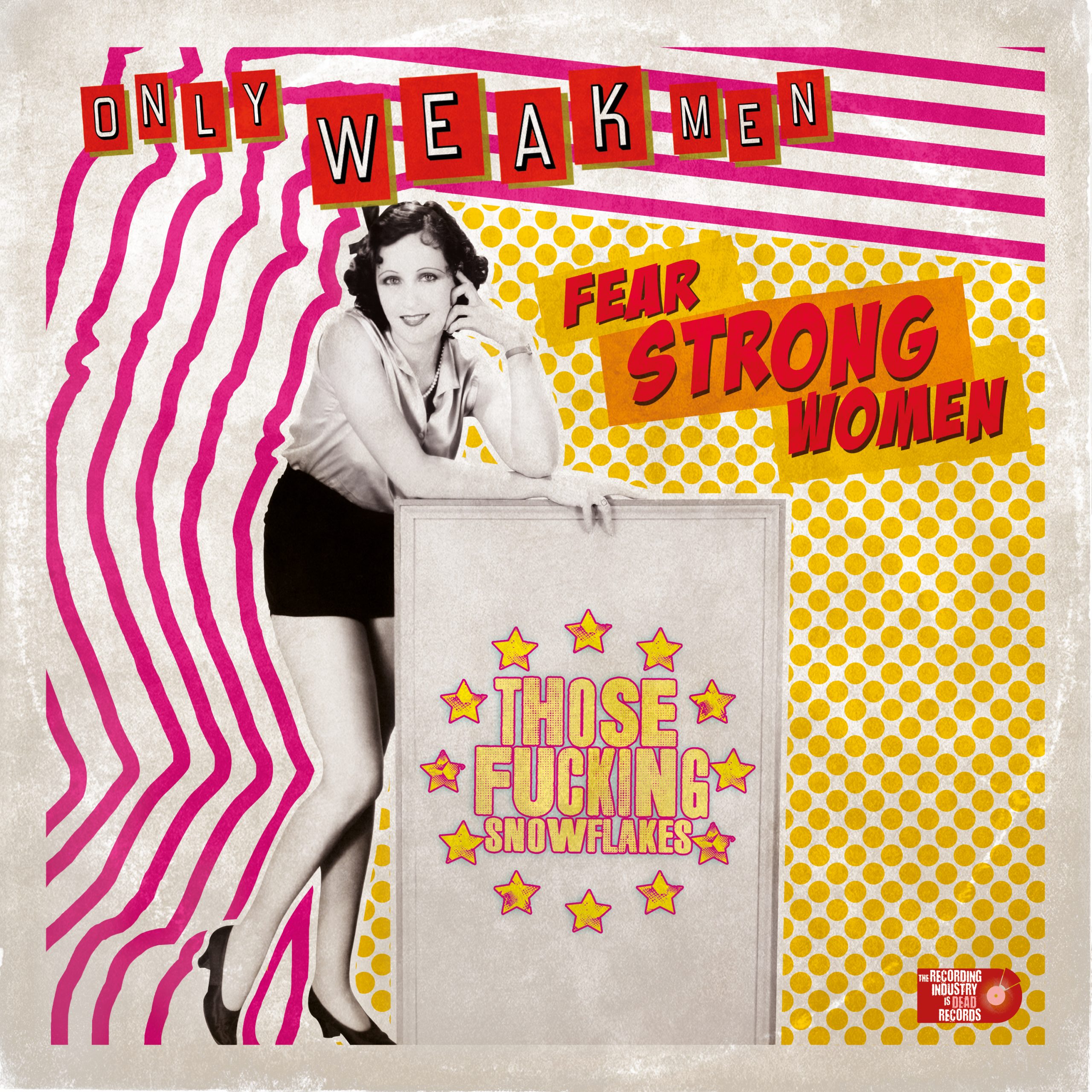 Our new song ‘Only Weak Men Fear Strong Women’ is out today
Buy or stream it everywhere, or click one of the handy links below. 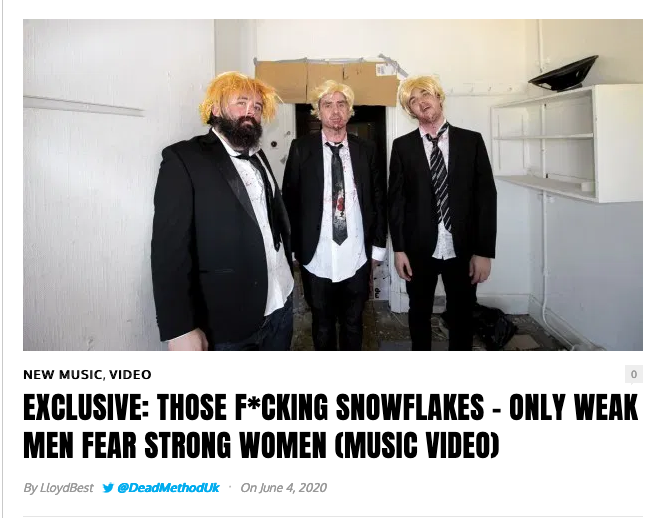 Head to www.tinyurl.com/tfswmvid to watch it now.

The song is available to stream and buy everywhere on Friday 12th June and is followed by the EP ‘Straight Wealthy White Male Suffrage’ on Friday 19th June.

Big thanks to everyone at RGM: Reyt Good Magazine for this nice little review of our forthcoming EP ‘Straight Wealthy White Male Suffrage’, thank you so much you lovely people.

Head over to the link below and scroll down to look at what they said.

Don’t forget to check out the other music they have reviewed too. 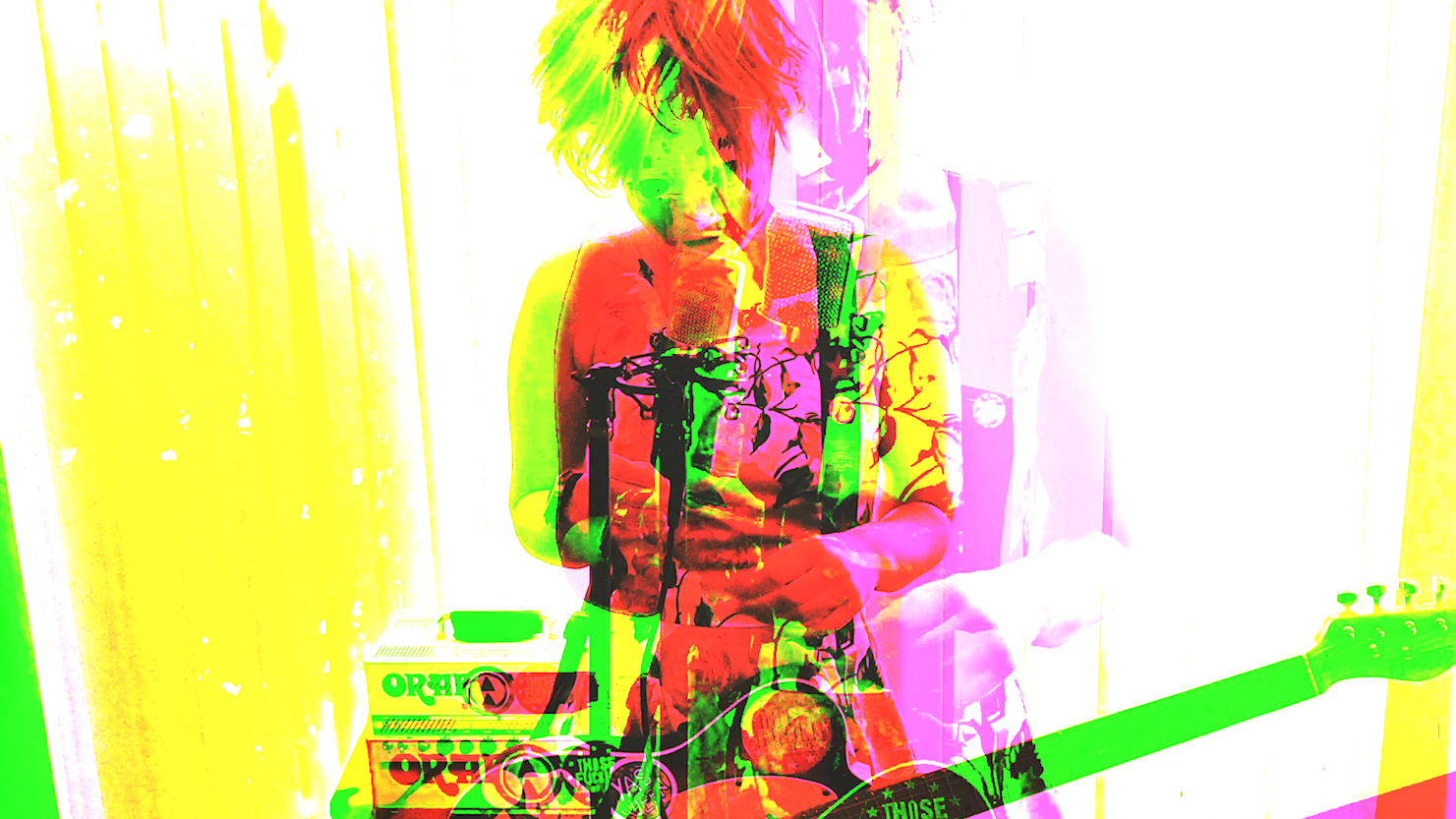 Our new EP ‘Straight Wealthy White Male Suffrage’ is released on Friday 19th June, it will be proceeded by the song ‘Only Weak Men Fear Strong Women’ on Friday 12th June.

The video for the song will be premiered on a great music site on Thursday 3rd June, news on that soon.

The EP title was inspired by some angry nutter ranting on facebook about the film ‘The Last Jedi’ featuring ‘too many lead female characters’ – the ‘woke bulltshit’ causing straight white men to become a minority and they will soon no longer be allowed to vote. I mean, it’s a sci-fi film. Madness. these people exist.

It’s five songs of energetic shouty calculator noise and will be available on Spotify, itunes and all those other numerous musical services.

In less great news, Rebellion Festival has been cancelled so we will not be playing. We hope to return to performing live again when the current situation has eased a bit.

We are please to announce our new EP
‘Straight Wealthy White Male Suffrage’
is currently being mastered by the amazing TobiSonic, it contains 5 tracks of absolute noise that will never be played on the radio or listened to by anyone with taste.

Contains the songs:
‘Weak Men fear Strong Women’, ‘Boris Johnson and the Big Red Bus of Bullshit’, ‘Carnibores’, ‘Meat Is Murder But Morrisey’s A Dickhead’ and ‘Tangerine Pirate of the NHS’

We are hoping to have it out by summer, as we can’t get out to film a video we’ve put a call out to women to send us in clips of them miming along to the song ‘Weak Men Fear Strong Women’ – or just filming themselves doing whatever.

If you want to get involved email tfsnowflakes@gmail.com